You are here: Home / Open Democracy / Rebooting nations – what would states and democracy look like if we invented them today?

This post is a part of series of postings related to Demokratiahack (Democracy hackathon), arranged by Sitra, OKFI and Tulevaisuuden valtiopäivät.

Digitalization is really about transformation, not just digitizing existing processes. We ought to know that, yet we get stuck in the old systems mode, and fail to think out out of the box (luckily, this is starting to change). With regards to e-government, we in Finland often look to our southern neighbor, and look at their fast progress – praising it as exemplary (or sometimes dismissing it), and citing for example the non-existence of legacy systems as a benefit Estonia has to bypass us with seemingly effortlessly. But what if we think further. What would disruption REALLY mean – surely more than e-voting or e-residence programs!?
What if we build NEW states, republics, democracies – how would they work? Let’s look at a modern example of literally hacking together a nation, Liberland. 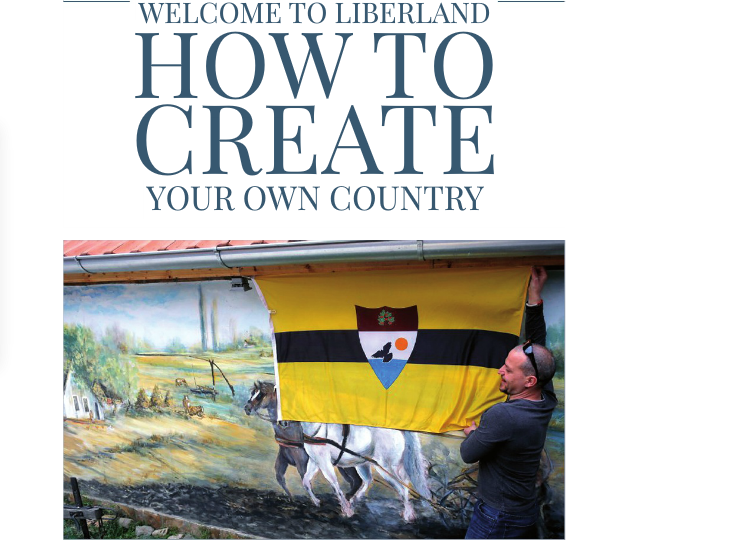 The Free Republic of Liberland is a sovereign state located between Croatia and Serbia on the west bank of the Danube river, and area also known as “Gornja Siga”.This area is not claimed by Croatia, Serbia or any other country, and was therefore terra nullius (or no-man’s land) until Vít Jedlička (the President of Liberland) seized the opportunity and on April 13, 2015 formed a new state in this territory. The total area of approximately 7 km² makes it the third smallest sovereign state, after the Vatican and Monaco. Liberland is a micronation – an entity that claims to be an independent nation, but is not (yet) officially recognized by world governments or major international organizations.
The motto of Liberland is “To live and let live” because Liberland prides itself on personal and economic freedom of its people. These are guaranteed by the Constitution, which significantly limits the power of politicians so they could not interfere too much in the freedoms of the Liberland nation. The objective is to build a country where honest people can prosper with minimal interference from a centralized government. “We need more countries like Hong Kong, Singapore and Monaco, especially in Europe,” Jedlicka asserts. “We really needed another tax heaven, not tax haven.”
Key values in running the country include voluntary taxation (not no taxation), an almost non-existent government, no restrictions whatsoever on speech or information. The nation’s basic services, such as power, healthcare and waste disposal, will be run either by private enterprises or through crowdfunding campaigns. Currently, some 400 000 people have already applied for citizenship for this libertarian state.

Hacking together a high-tech state

From a tech perspective, then, there are a number of quite exciting and interesting tools, technologies and visions that Liberland uses or is planning on deploying.
For example,the constitution and the laws of Liberland are stored openly in GitHub repositories, a development platform especially used by open-source projects to openly host and review code, manage projects, and build software alongside millions of other developers. This means that anyone can make suggestions and contribute (or reuse) the content.
Liberlandians are especially interested in blockchains changing politics and government, in particular to decentralize government. Blockchains are a way to record financial, physical or electronic assets in a new, secure, transparent way. Blockchain has been tried out across the world in various experiments (e.g. land registries in Georgia, Sweden and others), but an extensive deployment has been missing.
Liberland claims to work together with eGaaS, an international Blockchain platform for organizing the economic, state and social activities of citizens and their communities by using a smart law and smart contract system. This system implements four basic functions needed for efficient transfer of most types of government, legislative bodies and business activities into Blockchain technology, i.e. financial system, registry structure, smart contract algorithm and a mechanims for smart law formation and execution. Smart laws are algorithms describing the rules and conditions regulating the execution of state laws. The credibility of smart laws is confirmed by the digital signatures of representatives of legislative bodies. Smart laws effectively lessen the bureaucratic burden that “traditional states” face.
These are just a few of the ideas that Liberland has – and there will be tenders out that e-revolutionaries can pursue.

Starting from zero, but still stuck to old conventions?

Liberland is an interesting experiment as it is trying to set up its various diplomatic ties to other countries. However, as it is setting up embassies, diplomatic corps and so on…it is ironic to note that there ARE indeed conventions which need to be considered. Even a micro-state cannot exist in isolation – and thus the world of diplomacy forces it into some conventional things like foreign policy, ambassadors, physical passports…
The attitude has been at times somewhat dismissive from other countries. However, dozens of embassies have been set up, and diplomatic ties are in the formation phase. For example, Finland’s ambassador to Liberland has been named (Mikko Järvilehto). First formal recognitions are awaiting – perhaps due in 2017.

What’s in it for the democracy hackers and the welfare state in general?

So, you might say that Liberland is pretty provovative or scary, from a welfare state’s point of view. Or, from the point of view of nation-states, in general. Will efficient tax heavens like Liberland undermine welfare – or create new prosperity. Will people voluntarily pay taxes – like they happily paid for Radiohead tunes?! 🙂
To me the question is, what could we learn from Liberland – the nation, its principles, its democracy and its processes? What can we learn from the philosophies of the libertarian anarcho-capitalists? What can we learn from the technology experiments. I do think there is a a lot to learn – and this will certainly not be the last independent tech-state initiative. While by no means do I claim to be a technology optimist, I will claim that dinosaurs must change. We invite you to continue discussion at Open Democracy Finland  Facebook page and Twitter, for example!
References – read more at:
https://liberland.org/en/main/
http://conference.liberland.org/mobile/index.html
http://investment.ll.land/liberland-02-2017.html
https://github.com/liberland/
http://www.the-blockchain.com/2016/11/22/egaas-announces-shift-liberland-egaas/
http://www.the-blockchain.com/2017/02/23/liberland-launch-online-startup-contest-kick-off-smart-nation/
https://www.bloomberg.com/news/articles/2015-07-21/inside-liberland-the-place-of-no-taxes-where-crowdfunding-rules
http://www.telegraph.co.uk/news/2016/05/24/the-crypto-libertarians-using-technology-to-undermine-the-nation/
http://www.independent.co.uk/news/world/europe/welcome-to-liberland-europes-tiny-new-country-where-taxes-are-optional-and-youre-allowed-to-move-in-10185477.html

Make use of the services and publications we have made, come to our events, join our community or get involved in our projects! END_OF_DOCUMENT_TOKEN_TO_BE_REPLACED

END_OF_DOCUMENT_TOKEN_TO_BE_REPLACED

Make use of the services and publications we have made, come to our events, join our community or get involved in our projects! END_OF_DOCUMENT_TOKEN_TO_BE_REPLACED